In the morning we had a range or workshops, some from invited contributors and some offered by people attended the event. These were the workshops:

Notes from the morning sessions

Some are more complete than others, but this will hopefully give you a taste of the wide range of conversations...

Main learnings, insights or conclusions
John wrote ‘Apple Varieties in Scotland’ in 2001, which was very influential. He produced it after planting 150 varieties in Ayr – so people can get useful advice on what to plant. It’s now out of print – but perhaps could be republished – maybe funded through crowdfunding?
What other resources on Scottish apples exist?

The SCRI had a ‘museum’ collection of local varieties – over 300, but there has been very little research on varieties and knowledge lost after WW1 aside from David Storey’s article from 1959.  ‘Fruit and vegetables in Scotland’ by Ken Cox, is very good, but not all varieties are included.

There’s a need for funded research on fruit trees – most is now focused on soft fruit instead. There’s a perception that apples can’t be grown in Scotland. Cox doesn't do well in Scotland. There are very few locations with opportunities to grow well. Nurseryman can produce but also need feedback from growers around the country. Growers in turn need advice on criteria to judge ‘good varieties’.

‘Scrog’ variety, which is close to crab apple, could be OK for cider.

Some varieties which are classed as cookers can be edible as desert to some tastes and in some areas -Scots Bridget for example.

Codling variety is long and thin. Many do well here.

John grew mostly Scottish varieties, whereas Andrew grows Scottish and others. Apples, it is thought, originated in China.

The growing season is shorter here in Scotland, though of course this changes from year to year. The early variety, ‘Lodi’ does well here. Hardiness is important particularly of the flowers of the tree – Keswick codling is mentioned in particular.

The UK became dependent on imported apples from the Commonwealth. Varieties bought from the south or from supermarkets are unlikely to do well here. In Scotland the apple needs to ripen early – ‘Discovery’ is a good example of this. ‘Hood’s Supreme’ does well in Perthshire.

There is now a big demand for Scottish cider apples, locally grown fruit is required for this potentially big business. Many Scottish varieties may make a good cider.

‘ribston pippin’ is quite late and does well even in the West of Scotland. It is similar to a cox which does not do well here.

Small fruit is suitable for the children’s market, as they can’t often eat a large apple. Small apples can come from unpruned trees.

‘Belle de Boskoop’ is a great apple which does really well in the Perthsire area. It’s described as a big, clean fruit and is excellent for juicing. Other good varieties worth mentioning are ‘Tower of Glamis’, ‘Discovery’, ‘Worcester Pearmain’ and ‘James Grieve’, which lives for fifteen productive years and can be replaced when it gets old. The George Cave delivers great apples on a M26 root stock which means you don’t have to wait long for these early apples, unlike those trees grown in the 1950s. ‘Exceter Cross’ is still under trial.

Supermarkets will reject vast numbers of ‘imperfect’ fruit. There is a wider market in farm shops etc.

Pears grow well in Scotland, especially if south facing on a wall. There are large trees in the Clyde Valley. However there may be a problem to grow them on a quince root stock. Many varieties are now self-fertile, although cross pollination is also good.

Varieties mentioned are: ‘Warden’ pear – maybe best stewed. ‘Conference’ also widely grown.’Moonglow’ (William cross). Old records from walled gardens are a good pace to look for varieties grown. ‘Asian’ pears are big trees. ‘Hessel’ and ‘Maggie’ are small fruits but we only need to learn how to use them. ‘Jargonelle’ pears are from a ‘tip-bearing’ tree, producing juicy and sweet fruits. ‘Lord Derby’ does well in Scotland.

Notable fruit trees that Andrew propagates are ‘Stafford Gold’, ‘Lothian Red’, ‘Carse of Gowrie’ and ‘Lady of the Lake’. He gets budwood from Brogdale to propagate. We need to look for Norway, Sweden and Russia and micro climates, where hardy flowering plants, such as ‘Astrakhan’, will do well in Scotland. Our palettes need to be re-educated as are only used to supermarket varieties.

In north and west Scotland in particular, growth form is important, using wires, trained etc. Pruning too is important especially early to get a good structure. The variety ‘White Melrose’ is very branched, hence you will get your fruit early.

Any action points that emerged

Growing orchard fruit in a Permaculture system, with Graham Bell

Unfortunately, although this session was well attended and much enjoyed, the notes were not usable. Luckily Graham has written a great deal - here is a good place to start if you'd like to know more: http://grahambell.org/

Forth Valley Orchard initiative continues a tradition of Scottish orchards. Important points on the organisation's timeline include:

2006 - Initiative to introduce a different mind thought re: vending machines

- Margaret involved to work with schools

- initiative to set up orchards in Forth Valley

Schools - Margaret part of initial survey. Fruit trees that were neglected. Carry out sit surveying/evaluation. Wants to have children involved in orchard activities. A valuable resource.

Teachers Resource Pack is FREE to schools or those working with children's groups . The Pip Game is also available. Rural schools more likely to be outdoors and have an orchard.

FVO website has a list of suppliers who grow/provide fruit trees and encourages links this other, e.g. Susan Rodgers.

What is an orchard? 5 trees, schools orchards, old houses with fruit trees

FVO funding runs out end March 2015, but they're hoping to develop support for public in PV

Orchard Management Course with Elmwood College - practical training has building up a group of people who are keen to help others. Voluntary help or charging - building up a pool of expertise in Forth Valley.

Scrumpers Network: anyone can join in. Links with Crispin's mapping, use apple press

Study done indicated that there wouldn't be any orchard millionaires, but a diverse range of orchard products.

Orchard and links with local food including Emily Coultenhove Project has fruit trees - with plans to use in cooking workshops, foraging. Community realise this is a valuable resource. Micro branding.

There are 5 or 6 community orchards in Stirling. Networking - Transition Stirling using fruit trees in Riverside Community Orchard for pruning event.

Any action points that emerged

Unfortunately there were not any notes from this session. However you can find out about Scottish Orchards here and the Commonwealth Orchard project here.

Orchards, a model for social justice? with Jonathan Baxter

Who gives a fig, apple, pear or plum when poverty is systemic?

orchards have alternative values, they could alleviate poverty, they provide access to a good diet, meaningful/ethical work, improve health and well-being etc

orchards have 'rewards' beyond fruit: investment in the future, shared experience of planting, contribution to a wider organism.

“All part of a bigger picture of social justice and health”

Why do we import what we can grow locally?

what do we lose by way of local knowledge, meaningful work, a sense of personal investment and satisfaction?

Orchards + nature and culture working together.

Strategy: why we plant orchards, not just how

Land/space - who owns it? what 'value' does it have? For whose values is it put to use?

Susan works on three acres of dairy farmland - Knockraich Farm, Finty
She grows varieties that are chosen for purpose from a range of root stock including Discovery, Grenadier, Russets, Bramley. These trees are raw grafts V of old cultivars.

You need to plan for spoilage - about 150 out of 750 trees planted fail. If you have no success with regrafting you will need to re-plant.

She has been looking at producing cider from her apples, but lacks an established distribution network. She's looking at how to do this on a small scale, keeping it very local.

Orchards require minimal intervention once established, the main task is dealing with cancer and mildew.

Harvests are unpredictable - this year her orchard has yielded her first meaningful quantity of fruit in 4 years.

Nuts in Anam Cara in Inverness-shire
Alistair Cunningham. Three Birds
You get nuts after 5-7 years. Propagate with roots, as shoots come so as not to disturb the growth of the tree.

Hazel trees are a great addition to a forest garden, with the hazel as the canopy layer. You can plant bushy herbs like marjoram for the next layer and strawberries for ground cover.

Sweet chestnuts need cold as much as they do sunshine, as do the Scottish bilberry 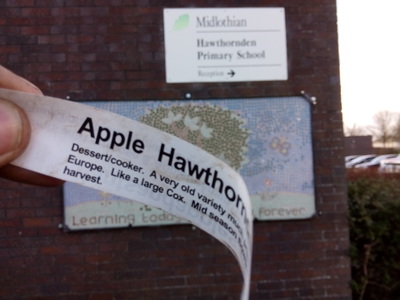